Periscope & You: How to Use Periscope for Marketing 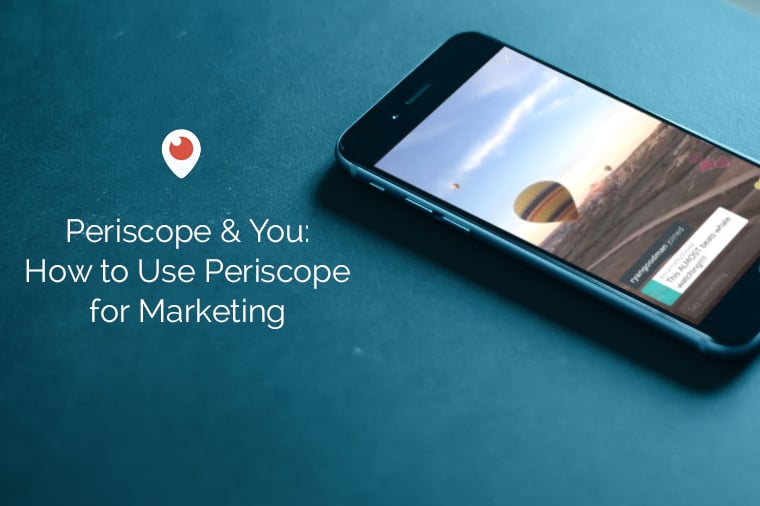 Periscope & You: How to Use Periscope for Marketing

If there was one new app that had buzz over the summer, it was Periscope, which added ten million users in the first four months of its existence. The creators describe Periscope by saying that it allows you to “explore the world through someone else’s eyes.”

That sounds fantastic! But uh…what does that mean exactly? And what does that possibly have to do with marketing your business? A whole lot!

What is Periscope, anyway?

It’s actually pretty simple. To use Periscope, you’ll launch the app on your phone, press a button, and voila, like that, you’ll be broadcasting live to a worldwide audience.Sounds like just another navel gazing, “look at what I’m eating for breakfast” technology, you say? Certainly, Periscope can be used for that, but Kayvon Beykpour, the founder of Periscope, has bigger ambitions. In fact, he first came up with the idea for Periscope when he was traveling. He found his trip to Istanbul delayed when protests broke out and he couldn’t get an on the ground look at the situation. If Periscope had been around back then, he could have simply found a protester through the app, opened up their livestream of the event, and like that, he’d have a much deeper grasp of the situation than he could have ever found on the heavily edited news channels. In fact, he even could have commented on and favorited the protester’s livestream to connect further.Since the launch of Periscope, users have livestreamed from behind stage on the Scandal set, from inside restaurants, at the edge of a hot air balloon, and even from the top of a pair of water skis. Twitter bought it recently (and quietly), so it is now fully integrated with that social media giant as well. That has big benefits, as we’ll see below.

If ever there were a type of marketing where you’re going to have to keep it real, it’s on Periscope. No one is going to livestream advertisements. Don’t let that worry you, though. If you’ve ever done content marketing, whether via blogs, social media, or YouTube videos, you already know this rule. The same thinking applies here.

Periscope is an excellent place to establish your expertise. In addition to writing a tutorial either for your product or to do with a pressing topic in your industry, livestream yourself or an employee actually doing what you describe in the tutorial. Your viewers will especially love when you stop to answer their questions in the comments, turning your content into a fully interactive experience. If your first few tries are successful, consider turning this into a regular webcast.

Maybe you’re launching a new product line and you want to give your followers a chance to grill you on the details. Or perhaps you’ve been noticing that there are a number of frequently asked questions coming through your contact page. Whatever the reason, host a Q&A so that your loyal and new customers can solve their problems, gain a deeper understanding of your product or service, and become even more loyal fans.

4. Go Behind the Scenes

Livestream a tour of the factory as your product is made. Stream from a trade show that your customers would never get to see. Record as you create a new piece of art or a design. Let your followers in on a brainstorming meeting, where they can see how your great new concepts are devised. Or, simply take your livestream to the break room where your customers can see for themselves how hard you work from them just from the pile of empty Keurig K-cups you’ve got strewn across the counter. Followers will feel special and will certainly be interested to see how it all comes together when they get a behind the scenes glimpse.

5. Hangout With Your Fans

Sometimes, the best live video marketing is just a hangout. Grab a cup of coffee and settle in with your followers to talk about whatever they’d like. Run out of things to say? Next time make it a themed hangout, where you host a party around your brand or product. If, for example, you make chocolate, you could challenge yourself and your fans to come up with the wackiest recipes on air — recipes you’ll try why you stream. Get as creative as you like!

Just as soliciting a guestpost from an industry expert can both lend credibility to your brand and naturally expose your business to the expert’s followers, so too can a livestreamed interview with that expert. In fact, it’s probably even more engaging.

7. Let a Celeb Take Over

Even if you don’t know or can’t get in touch with an big time celebrity, chances are you can reach out to the town superstar. Once you do, let them take over your Periscope feed for the day to talk about what you do and just generally be the local celeb they are — bringing their fans along with them.

Provide your Periscope followers with a quick glimpse of a product that is still in development. Alternatively, do an entire product release or demo, or even a stunt that can only be watched via Periscope and not on any other of your social media channels. Limiting neat opportunities like this to Periscope will create a feeling of exclusivity that will make your followers feel special and keyed in.

Again, you want the bulk of your presence on Periscope not to be directly about promotion — but that doesn’t mean you can’t share a good deal or contest. Periscope is great for announcements, especially when paired with Twitter promotions. The more interactive you can make your contest, the more successful it will be.

10. Turn the Camera Around

It doesn’t always have to be you livestreaming out to the world. Host a remote focus group by asking followers to livestream themselves using your new product and providing feedback. You can also set up alerts so that you know the instant a follower is livestreaming. Even if they’re not talking about your product, you can still engage much like you would on other social platforms with favorites and comments. This will in turn create a more loyal following.

Through Periscope, you can do all the best that content marketing has to offer. Done right, you’ll create transparency, establish expertise, create a firm and unique persona in the minds of your customers, and well, just seem pretty darn cool. And because it’s linked into Twitter, growing your platform on Periscope means growing your platform here, too. That’s great for your entire social media portfolio. So get ‘scopin’!